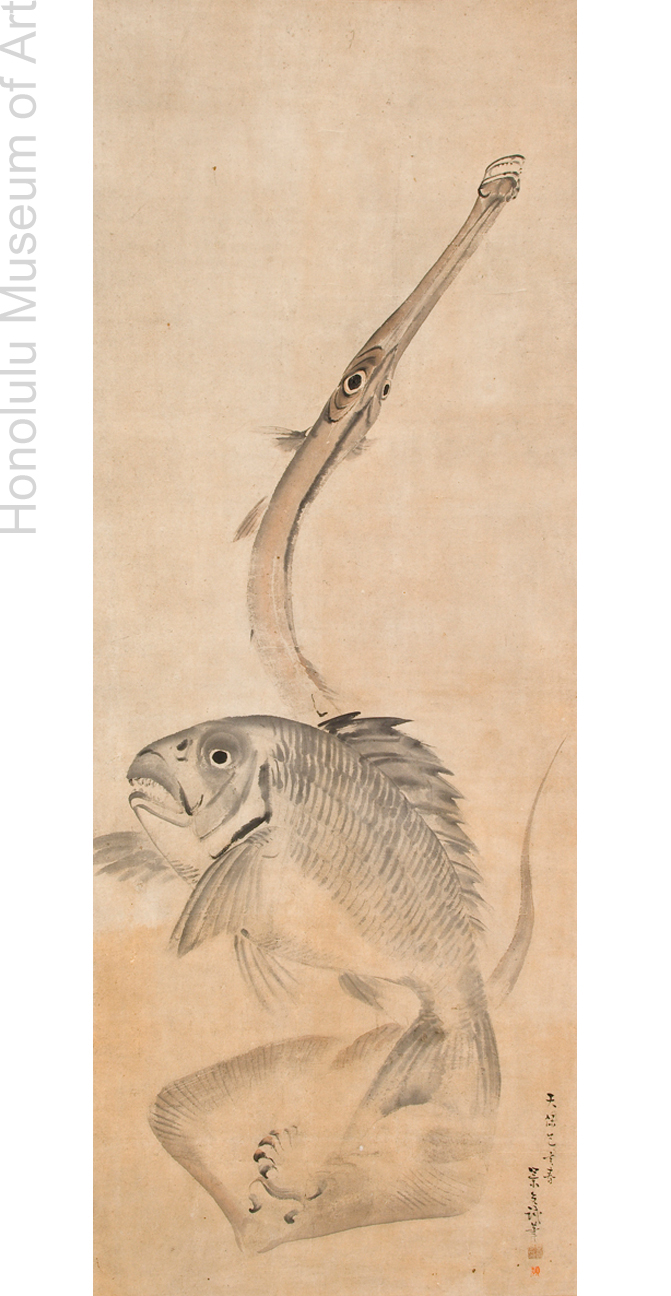 As the youngest brother of Matsumura Goshun (1752–1811), founder of the Shijō School, it is no wonder that Matsumura Keibun became a practitioner of that style as well. Studying the life-painting (shasei ) technique popularized by Goshun, Keibun became a specialist of bird-and-flower paintings that are notable for their emphasis upon decoration and for their use of vivid color.

In this hanging scroll, however, Keibun focuses on ink brushwork and light coloration in a depiction of three sea creatures. One is a stingray (ei ) located at the base of the composition, which anchors the triad. The artist may have chosen to display the fish in an unnatural upside down position to create the impression that it has been recently caught by fishermen and cast upon the deck of their boat. Atop the stingray is a sea bream (tai ), and Keibun successfully captures the distinguishing features of this carnivorous, bottom-dwelling fish, including its wide body, its exaggerated top fin, and its large teeth. In the upper half of the composition is a needlefish (sayori ), which is typically found closer to the surface of open water. Echoing the shape of the stingray’s tail, Keibun arcs the body of the needlefish, leading the viewer’s eye to the right top corner of the painting.

Together the forms of the three fish create a dynamic, curvilinear composition that brings life to Keibun’s painted creatures, as does their gentle variation in color from sepia, to blue-black, and finally reddish ink. Artists from both the Maruyama and Shijō Schools based their paintings on drawings from life, and for this work, Keibun may have observed and sketched the fish on display in a market. While the reasons behind this odd grouping of fish is a mystery, it may have been intended as a kind of visual word play: put together, the Chinese characters for these three fish read ei tai shin, a homonym for “eternal purity.”