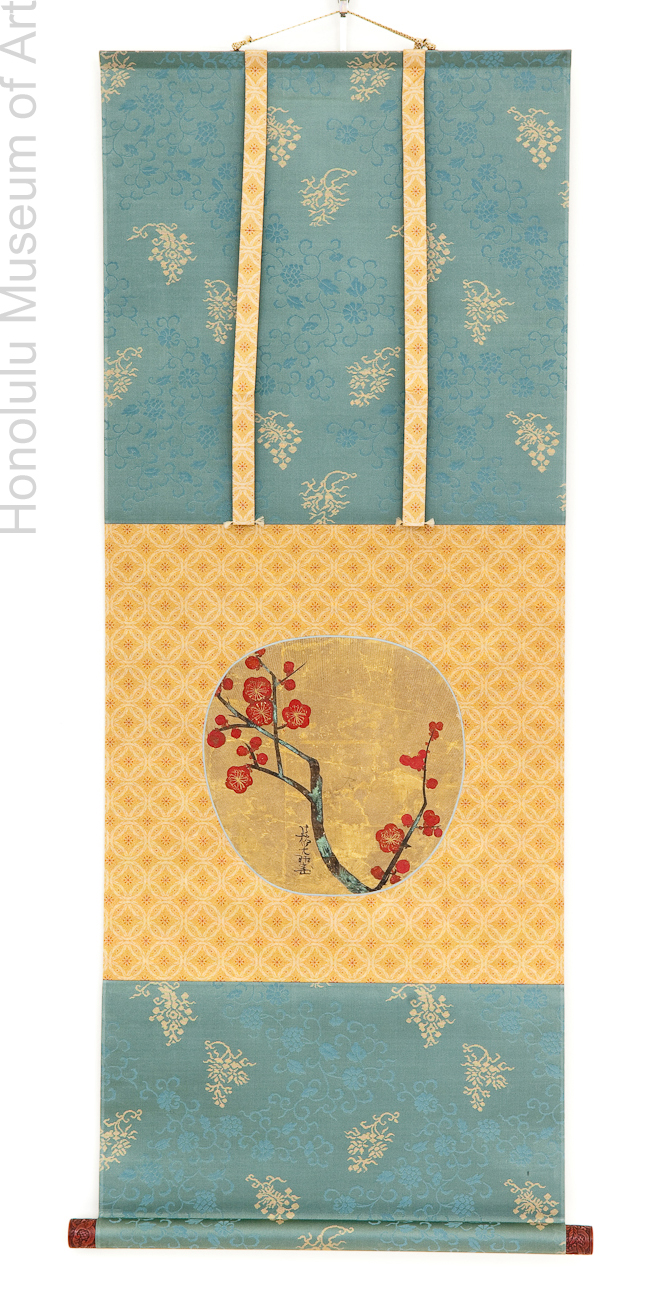 The son of a merchant, famed Rinpa artist Ogata Kōrin initially studied painting under Yamamoto Sōken (d. 1706) of the Kano School, but originally never planned to make art his career. His familiarity with textile design came in part from his experience working with kimono as part of the family business, which introduced him to such important designers and artists as Tawaraya Sōtatsu (fl. early 17th century), Hon’ami Kōetsu (1558–1637), and Kitagawa Sōsetsu (active c. 1639–1650), but it was Sōtatsu who most inspired him. Kōrin is known to have created renditions of Sōtatsu’s famous Wind God and Thunder God (Fūjin raijin zu byōbu) and Waves at Matsushima screens as a way to learn from the departed master.

Like many Rinpa painters, Kōrin was known in part for his successful designs for painted fans, including both sensu (folding type) and uchiwa (non-folding type). This example featuring plum blossoms is of the latter type. Plum trees were a favorite subject of Kōrin, whose Red and White Prunus, a pair of two-panel folding screens in the collection of the MOA Museum in Atami, is considered a masterwork of the Rinpa movement. Kōrin painted plum tree motifs on a variety of formats as well, including but not limited to hanging scrolls, fans, and kimono books, and many of these were later transferred to pattern books, where they became sources of inspiration for other designers of textiles.

The composition of Plum Blossoms is arranged in a typical Rinpa manner emphasizing asymmetry, yet at the same time it achieves compositional harmony through a thoughtful arrangement of positive and negative space. The weight of the plum branch spreading diagonally across of the surface is balanced through the inclusion of the blossoming tendril stretching out in the opposite direction. In terms of artistic technique, the lichen on the bark of the branch first appears to have been rendered using the traditional tarashikomi technique, but closer observation shows it was completed using a combination of pigment and gofun (ground seashell powder). Finally, in an unusual decision, Kōrin used thin lines of cut gold foil (kirikane) to render the details of the red plum blossoms, a technique more closely associated with Buddhist icon paintings than with Rinpa painting.