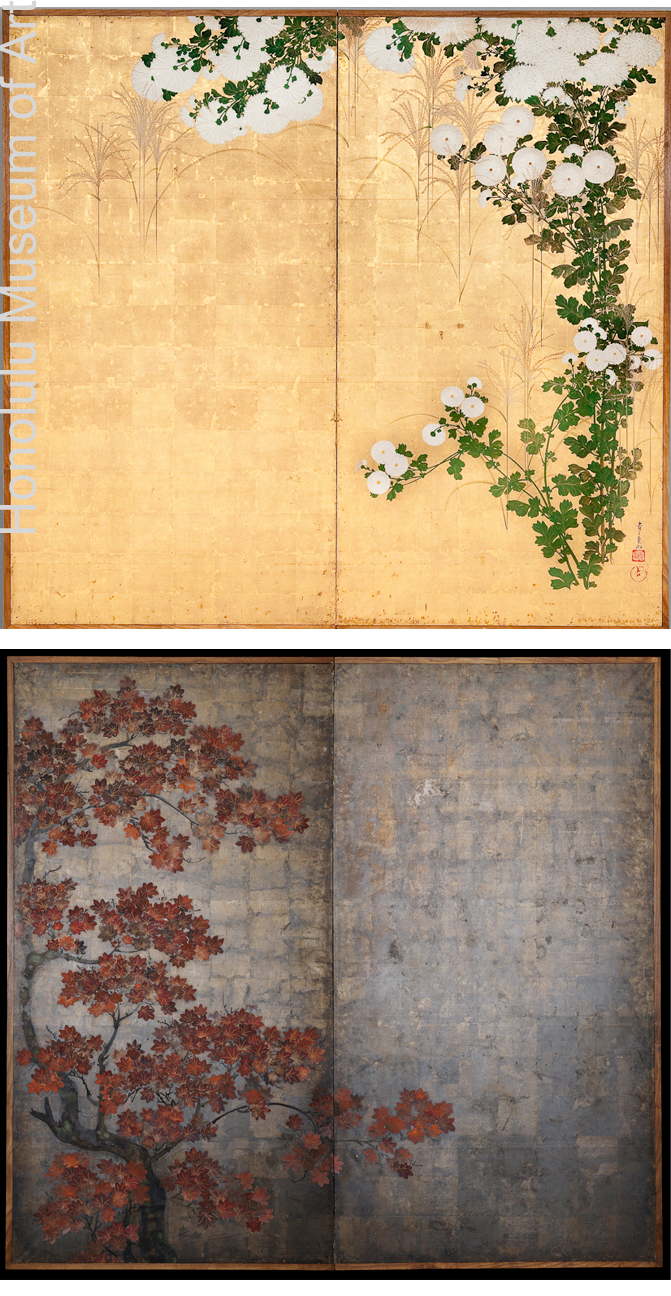 In Rinpa, artists often attempt to provide a balance between subjective and objective interpretation by choosing a subject found in nature and emphasizing those aspects that are commonly admired while carefully deleting extraneous or unseemly qualities. In this screen painting of chrysanthemum flowers (kiku) paired with barley (mugi ), the artist, Ogata Kōrin, clearly uses such a technique, limiting the number of colors in the composition and allowing the dark green of the leaves to complement the whites and yellows of the flowers. The flowers are rendered using the “boneless” or mokkotsu technique, offering the impression of forms defined entirely with pigment (ink outlines that Kōrin used to define the petals are now apparent in areas where the pigment has flaked off).

The artist relies on ground seashell powder (gofun) quite heavily throughout the composition to lighten the tone of the pigments. The barley is rendered solely through the application of gold pigment onto a textured layer of gofun to create a brown-tinged color. Without the use of gofun, the barley would not be readable against the gold leaf background of the painting. It is possible that Kōrin used various-sized molds carved out of wood (the same type of molds used in the production of okashi candies) to shape the gofun into the semblance of barley and chrysanthemum flowers.

Kōrin clearly spent time considering the use of empty space within the composition. The space itself is ambiguous, and the chrysanthemum flowers appear to be growing over a manufactured structure such as a trellis. The composition is most heavily weighted in the upper right corner, suggesting that this artwork was originally designed as the left half of a pair of screens. If so, the partner screen, which is now missing, likely provided a sense of balance by depicting an abundance of some other species of flower on the lower left corner. Such a strategy was often utilized by Rinpa painters to create a sense of rhythm across multiple folding screens.

Close inspection shows that the chrysanthemum petals have been rendered at different stages of blooming, with the flowers appearing smaller in size at the bottom and becoming increasing larger towards the top of the composition. Forms within the flowers are repeated throughout the composition. Repetition and rhythm can also be observed in the formal echoing of the bent barley plants, which correspond to the bending stalks of the chrysanthemum.

A noteworthy aspect of this particular screen is the reverse side, upon which a design of autumn maple leaves in red pigments upon silver leaf surface. This offers an interesting contrast to the gold leaf background of the Chrysanthemums painting. In two paintings, Kōrin appears to offer both a diurnal and nocturnal impression of autumn, a season traditionally associated with longing and lost love.