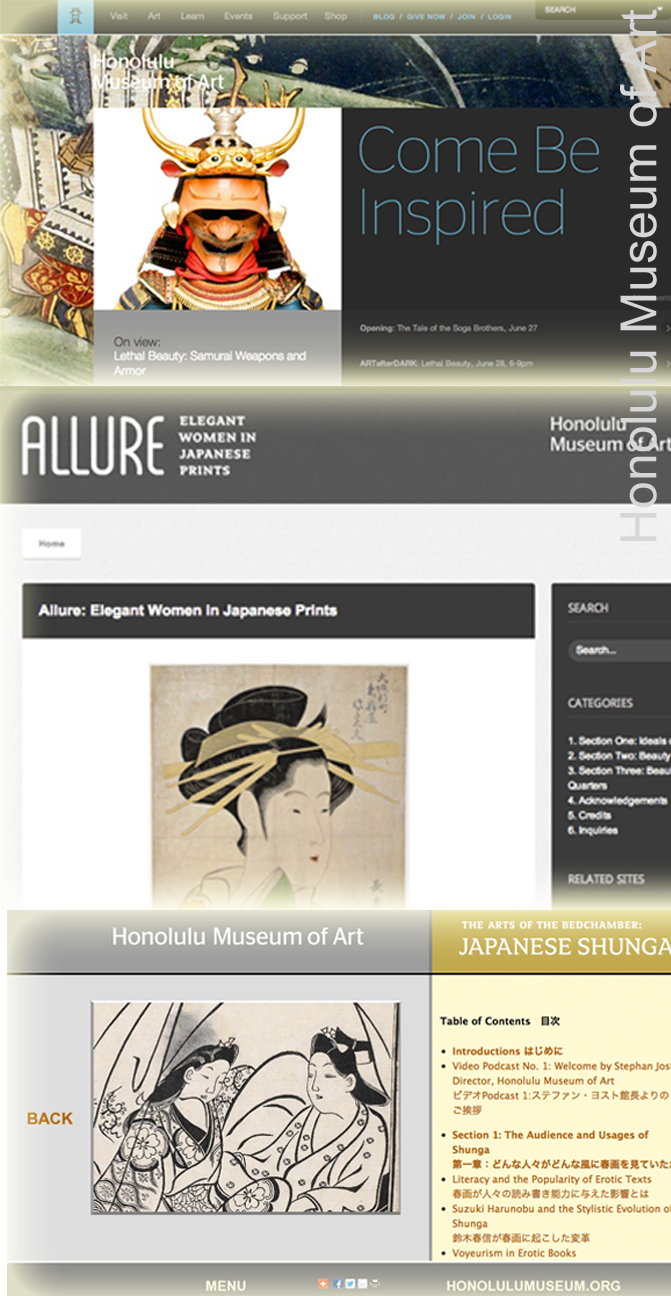 Japanese Prints at the Honolulu Museum of Art (database)

The crown jewel of the museum’s Japanese art holdings is its collection of more than 10,000 Japanese ukiyo-e woodblock prints, approximately half of which were donated by James A. and Mari Michener. In the collection are many masterworks by Kitagawa Utamaro, Katsushika Hokusai, and the world’s largest collection of prints designed by Utagawa Hiroshige. In 2010, the museum launched this digital database of the Japanese woodblock print collection, the result of a three-year project sponsored by the Robert F. Lange Foundation. Thanks to the foundation, more than 6,000 woodblock prints are currently available online, with plans to make the entire collection available to the public in the future.

Beauty (bi ) was of fundamental importance for Japanese artists during the Edo period, and one of the main genres was “pictures of beauties” (bijinga). No tradition better embodies the challenges involved in trying to understand the significance of beauty than that of the “art of the floating world” (ukiyo-e), which emerged from the distinctive popular culture of early modern Japan. In particular, commercial woodblock prints, the mainstay of ukiyo-e throughout the Edo period, were as ephemeral as the very idea of beauty from which they drew their primary inspiration. This exhibition includes many of the finest designs by the leading artists from the full flowering of ukiyo-e during the 18th century, selected from the Honolulu Museum of Arts’ collection of more than 11,000 woodblock prints, one of the largest in the world.

Japanese artists of the Edo period (1615-1868), including the most revered designers of ukiyo-e prints, were involved in the production of erotica known as shunga (literally “spring pictures”) as well as more restrained depictions of sexuality. Exploring the genre of shunga offers us a much richer understanding of ukiyo-e printmaking as well as the general attitudes about sexuality and gender that were prevalent in Edo society. Overarching themes that the exhibition explores include the role of erotica in the nationwide discourse on sexuality, concepts of gender as reflected in erotica, and the depiction of the commercial sex industry in shunga and other Japanese art genres. The exhibition promises a startlingly bold reconsideration of many beloved works in the Honolulu Museum of Art’s permanent collection, and it guarantees to challenge the viewers’ assumptions and attitudes about sexuality and gender.