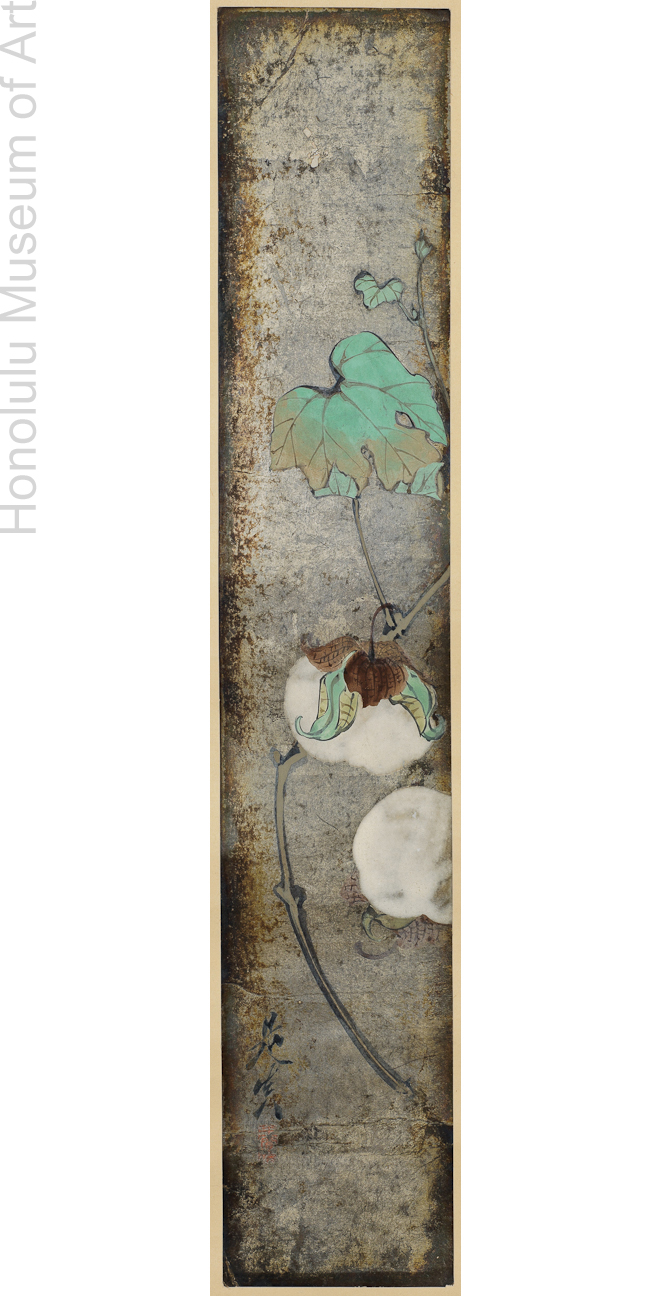 Shibata Zeshin began his prolific career at age 11 as an apprentice to a lacquer craftsman. As one of the few Meiji-era (1868–1912) artists to be featured in this survey of Edo painting, his presence is intended to reflect the fact that the Rinpa aesthetic enjoyed popularity among artists well beyond the Edo period (1615–1868). A master of design, Zeshin is considered one of the leading Japanese artists in the meticulous and time-consuming medium of lacquer. He perfected the decorative method of using gold dust to create designs known as maki-e (“sprinkled pictures”), and was successful in emulating in lacquer the texture and appearance of a variety of surfaces, including patinated bronze, earthenware, wood, and rusted iron. He used these and other techniques to create urushi-e (“lacquer pictures”), combining the rich color and clarity of lacquer with the flexibility of brush painting.

Both Zeshin’s unique sense of design and his consummate craftsmanship are evident in this painting. It was formed gradually through repeated applications of dense lacquer, the shapes contained within lacquer-ink outlines that show the tensile strength of Zeshin’s brushwork. The simplicity of the composition belies the opulence of the material used to create it: the background is dusted with a silvery mica powder that produces a lustrous sheen when viewed from particular angles. The elements of the composition reveal the artist’s sensitivity towards the seasons, and his interest in a refined naturalism. Zeshin delicately varies the colors across the surface of each leaf. The tips of the leaves curl inwards, and the seedpods have been painted with thick layers of white gofun pigment, but in some areas, the white color becomes translucent, adding a sense of depth and dimension to their soft billowy forms.