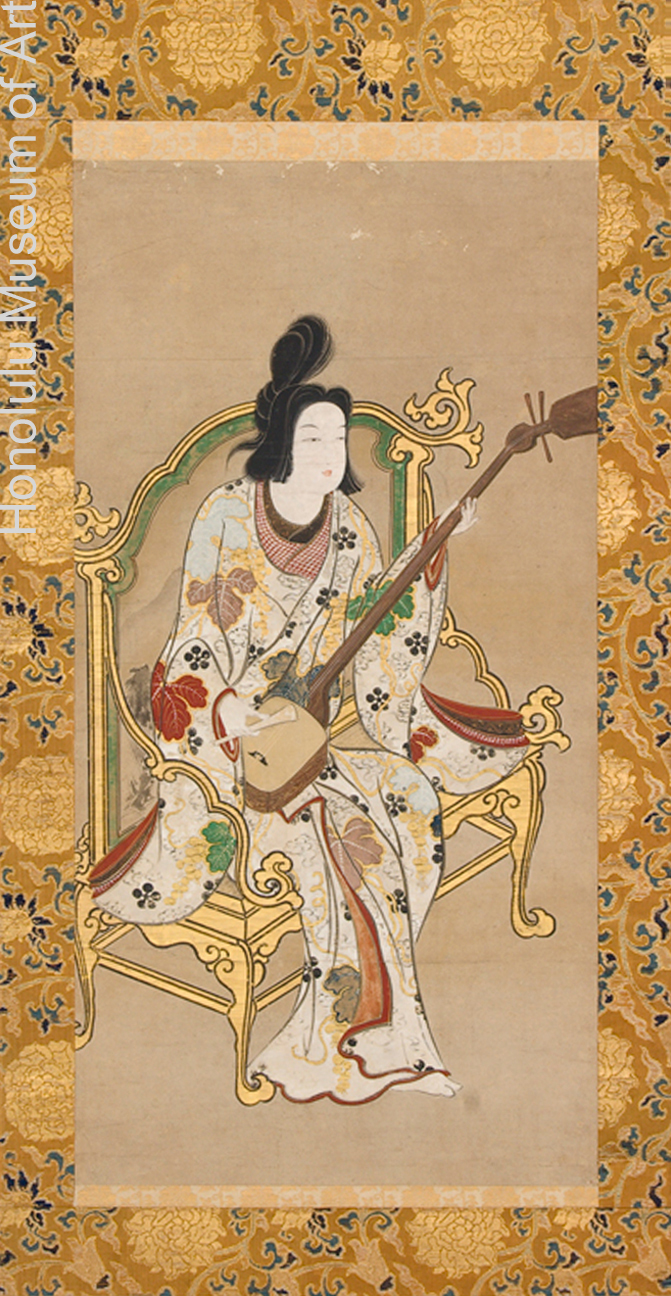 This painting features a courtesan sitting astride a Chinese chair.  She sits upright and still, and the only movement she seems to make is the subtle act of playing the shamisen balanced upon her lap. Her cool, reserved demeanor is mixed with an air of soft, feminine sensuality. Her hairstyle (hyogo waga) most immediately defines her as a courtesan, an attribution further supported by the pattern on her kimono. In fact, kimono patterns often served as visual aids in identifying individual courtesans. This particular painting might possibly depict the courtesan Takao, represented by the maple leaves of multiple autumn colors, referring to Takao-san, a mountain in Kyoto. [1] (It was customary for famous courtesans to be named after places of scenic beauty.)

Poems survive that praise the beauty of this particular courtesan, such as this one:

How beautiful,
Your name, like that of Mt. Takao
Reflected on the bright maple leaves
Or the moon mirrored in the water. [2]

Much like how Kabuki actors passed their names to rising young stars chosen to take their places, courtesans’ names were also sometimes carried on within brothels, as a way to indicate a pedigree of beauty, cultural achievement, and desirability. Such was the case with the name Takao, for multiple courtesans took this name, with the second Takao (1640–1659), who died ten years before this painting was produced, being one of the most famous. Her fame stemmed from her seduction of powerful men, as well as several scandals in which she became embroiled, and the fact that she met her demise at the hands of one of her conquests. Her infamy was such that she was occasionally depicted in Kabuki plays showing how the theatrical world and the world of the courtesan could sometimes mirror one another.